Theory of China being origin of tea based on historical records.

This theory is based on the record in Samguk Sagi(History of the Three Kingdoms) that says Kim Daeryeom brought tea seeds from Tang, China in 828(3rd year of King Heungdeok of Silla Dyansty) and planted them on the slopes of Jirisan. 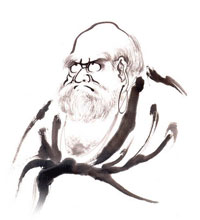 Theory of India being origin of tea based on "Bhodhidharma"

This theory is based on the legend that says a princess of Ayutah Kingdom in India, Heo Hwang-ok brought tea with her when she came to Garakguk Kingdom 2,000 years ago.
The legend is recorded in Garakgukgi(History of Garak Kingdom) and Bulgyotongsa(History of Buddhism).

Theory of spontaneous generation based on scientific evidence.

This theory says that considering the climate and soil of Korea, tea plants must have grown naturally from old days. Recently, wild endemic species have been discovered in Yeongnam and Honam areas. And Korea belongs to laurel forest, the tea habitat. Especially, tea fields were cultivated around Jirisan from old days and many tea-related legends and records centering on Hwaeomsa (temple) and Ssanggyesa (temple) still exist.