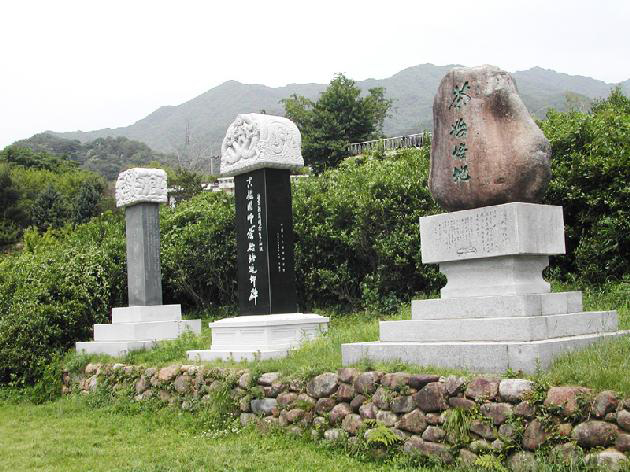 According to the records of the Samguksagi, it says that "When the envoy Daeryum-gong who came back from the Tang Dynasty in the 3rd year of King Heungdeok of Silla Dynasty (828 AD) brought seeds, the king ordered to plant tea seeds Jiri Mountain. Though tea was known from the time of the queen Seonduk, it was at this period of time that it got popular.” It can be seen that the tea was already drunken since the time of King Seonduk. At the tombstone commemorating Daeryum-gong at the entrance of Jiri Mountain Ssanggyesa Temple, it is said that Jiri Mountain Ssanggye Temple is the first tea farm of Korea (Dr. Lee Sun-keun). In Dongdasong written by Dasun Seon Master Choui, it says that ‘…tea trees growing in Jiri Mountain Hwagae-dong spreads to 4, 50 li, and there is no bigger tea farm in Korea…According to Dakyung, best tea trees are those grown from the rock cracks and tea farms in Hwagae-dong are all made of valleys and rock cracks.’

There existed tea in Silla from the time of Queen Seonduk (632 ~ 647) in the first half of the 7th century, and the practice of drinking tea became prevalent during the time of King Heungdeok (826 ~ 836). In the article of the third year of King Heungdeok (AD 828) of 「Samguksagi」, it is said that “When the envoy Daeryum-gong who came back from the Tang Dynasty in the 3rd year of King Heungdeok of Silla Dynasty (828 AD) brought seeds, the king ordered to plant tea seeds Jiri Mountain. Though tea was known from the time of the queen Seonduk, it was at this period of time that it got popular.” According to 「Shinjung Donggugyeojiseungnam compiled in the first half of the 16th century, that tea seeds were planted in Jiri Mountain upon the order of King Heungdeok was recorded in Jinju-mok Tosanjo, and it seems that it was because tea farm was believed to be at regions under the jurisdiction of Jinju-mok.

When Son Deuk-ji was working as Bugi at Jinyang, Lee Kyu-bo(1168~1241) decided to visit Hwagae and taste the tea. But considering the fact that local residents of that time were severely suffering from tea tribute and Lee Kyu-bo mentioned that “When discussing collecting teas at Hwagae, there was no distinction between strong men and the elderly. They barely gathered them from rugged mountains and carried them far away to Seoul on their backs. These are all blood and flesh of the people, reached here by their bloody sweat…,” Hwagae in the first half of 13th century was known as the representative tea producing region of that time and people paid tea as tribute to Royal Court until the end of February.

Ha Yeon (1376-1453), who served as a Gyeongsang-do governor as an early civil official of Chosun dynasty, made the following poem as giving farewell party with Hwagae tea when the Minister Min Eui-saeng left for China. "A fragrant tea is as precious as gold, so by this I give my farewell with deep gratitude. It is said that the Hwagae song is as clear as Yangi-san.” And Ha Yeon received a tea kettle from a companion and fresh tea from a monk. Receiving freshly harvested tea from a monk at Jiri Mountain, he thanked with his poem in return. “While the food tastes like before spring, plants and trees of Jiri Mountain are fresh. The better it is with pressed gold powder and jade, the more precious its color, fragrance and the taste are.” Considering that Hwagae tea was included in the travel gear of envoys sent to China in early Chosun period, Hwagae tea had high reputation and it was meant to boast our tea to China.

The hermit Eui-soon (意徇: 1786~1866) wrote Dongdasong(東茶頌) to praise our tea and mentioned Hwagae tea especially often. In 「Dakyung , he said that “The best tea comes from the orchid stone and the second comes from gravelly field.” Also in 「Manbojeonseo , he praised that “The best tea comes from the valley. Tea farms of Hwagae-dong have both valleys and orchid stones, so the quality of the tea made here is good for sure.” Based on various experiences of long tea-life, the hermit said that qualities of Korean tea are generally excellent along with its color and scent but specifically focused on Hwagae tea in Dongdasong. The hermit sang of Hwagae tea’s excellence in poems, "As the spiritual roots are entrusted to the sacred mountain, the fresh air and the bones like jade come from different seeds. As Nok-aand Ja-soon has seeped through clouds, everyone is full and prosperous."