In spring, low atmospheric pressure developed from Manchuria brings very strong winds and sandy dust blows from Northern China. In summer, the region falls in the monsoon period between July and August due to the high-pressure formed in the North Pacific and cold Oceanic high-pressure formed in the Okhotsk Sea. The weather is clear and mild in fall but it becomes very cold during the winter due to the seasonal Northeast wind.

While Mt. Sobaek lies from the north to south, Mt. Baegunsan stands on the western part and Mt. Jirisan on the northern part of Hadong. The southern part of the county borders the South Sea of Korea which has countless islands and bays. Because Hadong holds Mt. Jirisan which lies on the southernmost tip of the Baekdudaegan Mountain Ridge, the father of all Korean mountains, and the South Sea where the famous Hallyeo Marine National Park is located at, Hwagae region of Hadong is characterized by high elevations such as Tokkibong Peak (1,533m), Yeongsinbong Peak (1,650m), Samgakgoji (1,586m), and Samsinbong Peak (1,284m), Hyeongjebong Peak, Byeoksoryeong Hill and Seongjebong Peak and, Seonjingang River which originates from Mt. Jirisan and stretches to the South Sea, serves as the lifeline of Hadong. 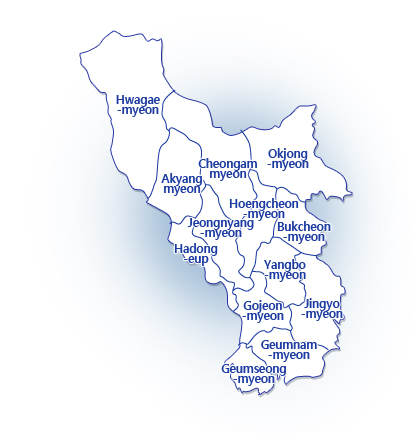