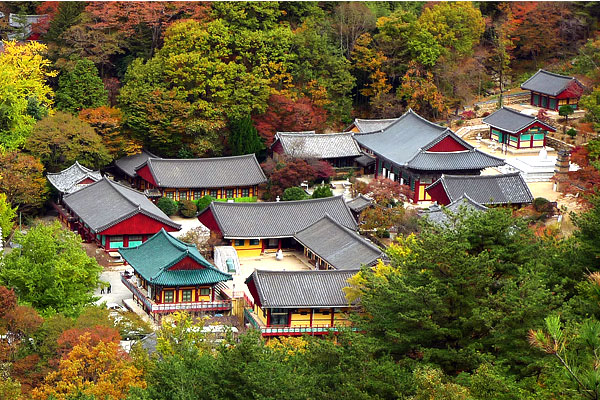 Samseonbeopsa, a student of revered monk Uisang, enshrined a portrait of Hyeneungdaesa of Tang, China here in 722(21st year of King Seongdeok of Silla Dynasty). And in 840(2nd year of King Munseong of Goryeo Dynasty) the temple was rebuilt. It has many precious cultural properties including national treasures and treasures.

Daegongyeongtap(Monument for Hyejo) and First tea plant cultivation site monument at Ssanggyesa
Daegongyeongtap is the monument built to memorialize Hyejo. Goun Choe Chiwon wrote the epitaph. It was completed in 887. In the monument, a phrase of 'Hanmyeong' is mentioned, which is one of the oldest records of Korean tea.

The monument erected at the first tea plant cultivation site was built by Korean Tea Lovers Association. 'Tea Day' was proclaimed on May 25, 1981 at Chokseongnu in Jinju and a monument was erected in front of the temple gate of Ssanggyesa. The full name of the monument is 'A monument of first tea tree cultivation site in memory of Kim Daeryeom, a Silla envoy to Tang.' The front side of monument was written by Rev. Ilta of Haeinsa(temple) and the backside was written by Dr. Lee Seon-geun, former president of Dongguk University.