Dayeonwon, a tea room at a temple built in the Silla period.

Dayeonwon is a tearoom at Changnimsa(temple) in Namsan(mountain) during the Silla Dynasty. According to Samguk Yusa(Overlooked Historical Records of the Three Korean Kingdoms), Changnimsa was at the site of the palace of the founder of Silla Dynasty, Pakhyeokgeose. From the record of the monument of Changnimsa which was written by Kim Saeng, a Buddhist monk of Silla, it could be inferred that the temple was constructed in early 8th century. From these records, it can be conjectured that Changnimsa was the king's temple built on the old palace site to enshrine old kings and prayp. It seems that Dayeonwon was like a guest room for kings when they come to the temple.

Tea pavilions and cottages of the Goryeo period

In Joseon Dynasty, monks as well as scholars drank tea as part of their life style of being content with poverty and delight in the Taoist way. A tea stove was placed next to Mangyeongnu(pavilion) by the riverside of the Daedonggang. And a record of people drinking tea on Baeksangnu(pavilion) in the Pyeongnamseong fortress still remains. The tea houses and tea rooms used by scholars of Joseon Dynasty were simple and modest.

Da-ok meaning tea house originated from Sin Wi's cottage. He called his house Da-ok. It was usually a thatched roof house made with cogon grass, eulalia, or straw. 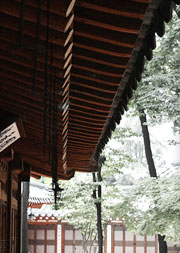 Basically modern tea rooms are neat and clean and show owners’ taste. There is no set room size and a space enough for 5 or so people is enough. The room is usually decorated with simple tea related items. A rush mat, bamboo mat or floor cushions are provided when drinking tea.