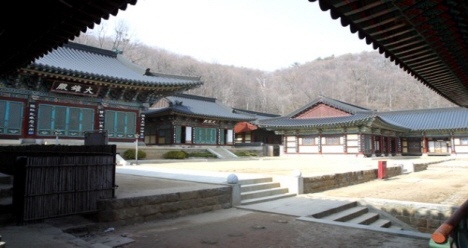 According to the legend of Chilbulsa, seven princes of King Kim Suro of Garak Kingdom followed their uncle Bo-ok from India to Jirisan, built a temple called Unsangwon and searched for enlightenment for 2 years. On a full moon night in August, a prince said,” The moonlight sheds its light from blue sky," Another one said,” The moon is fuller on the 15th of August and the wind is cooler in August.” Another one drew a picture of Ilwonsang (Circle which is the basic teaching of Won-Buddhism), then erased it with his feet. The remaining four princes were just standing with their heads down. At the time, Bo-ok Seonsa forcefully hit the ground with his cane and they gained enlightenment and laughed in a roar.

The king and the queen heard this and came to see the princes but couldn't find them. But the images of seven enlightened princes were reflected on a clean pond in front of the temple. So the pond got the name Yeongji which still exists at Chilbulsa. And Beomwangsa and Cheonbusa were built respectively at places where the king and queen stayed. Now, they are called Beomwang-ri, and Daebisa. It is said that the tea plants cultivated here are the descendents of tea plants planted by Bo-ok Seonsa and the seven princes.

According to 'Dongdasong,’ tea was still cultivated at Chilbulsa till 150 years ago. And Choui Seonsa noted at the end of Dasinjeon that he copied it here.