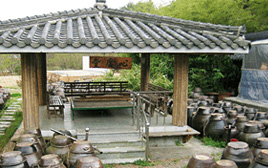 Known as ‘Saemmulgol Doyo (Kiln in spring water valley),' this place was famous from old days for its excellent soil for pottery. Using the soil, the pottery culture of Gaya period flourished here. During the Goryeo Dynasty, Celadon porcelain was made. In the Joseon Dynasty, this place was the largest production site of pottery for common people.

Around 15th century, 'Nunbagi bowl' was introduced to Japan. During the Japanese invasion, many potters were taken to Japan. They made these bowls, which were used as tea bowls by high ranking Japanese officials. And some of them have been designated as Japanese national treasures.

This kiln site was designated as Cultural Property No. 24 by provincial government, Gyeongsangnam-do in 1974. And the kiln site was reconstructed in 1983 to recreate the bowls. Every May, Plain Bowl Festival is held as part of Hadong Wild Tea Culture Festival. Throughout the year, many tourists from home and abroad come to visit the place. This is a village where traditional pottery culture is alive.