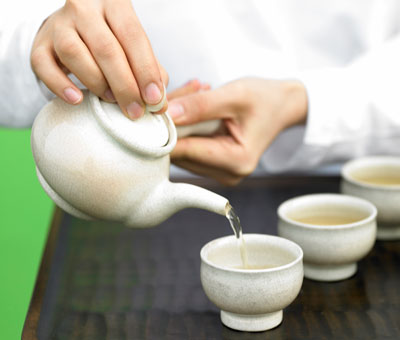 Tea culture was established in Korea during the Three Kingdoms period. According to Samguk Yusa (Historical Records of the Three Korean Kingdoms) and Garakgukgi (History of Garak Kingdom), tea and fruits were used for memorial services for ancestors. From this, it can be inferred that tea was used long time ago. Tea culture of Silla continued through Goryeo period (918-1392). Along with the development of Buddhist culture, tea culture spread to royal family, literati, monks, and noblemen. With the establishment of national ceremonies, ceremonies involving tea and an organization in charge of tea were established. The ceremony of offering tea became part of Buddhist ceremonies as well as national ceremonies. And the manner of serving tea and drinking tea became an important part of the etiquette for family and receiving guests. In the Goryeo Dynasty, the national Buddhist events called Yeondeunghoe (Buddhist mass) and Palgwanhoe (Buddhist mass praying for national prosperity) included a ceremony of serving tea to a king. They were large scale national events.

Tea etiquette for receiving a guest

In the Goryeo Dynasty, tea was used not only in the court and temples but also among common people. People bought, sold, and drank tea at a tea store. The fact that tea culture was wide spread to common people can be found in Goryeo Dogyeong (Illustrated account of Goryeo). Tea drinking custom of Goryeo was passed on to Joseon Dynasty. Scholars loved tea. National ceremony and etiquette involving tea were formalized and systemized in Gukjo Oryeui (Etiquette book).